We’re almost at the mid season break with the competition proving quite fierce this year.

The Wheatsheaf Oaks currently retain their hold on the top spot, with no less than three wolves chasing them, all with just one more defeat each. The two Derby Brewery Arms teams and the Steven Charles Snooker team make up this pack.

Lower down the table, the Wheatsheaf Trotters seem to have found some good form this season and are currently best of the rest, in fact just one victory away from the three above.

At the bottom sit the Burton Arms, although even they have 2 wins to their name, above them the Lodgers and Fugees are closely matched on 5 wins. With just 1 win separating 1st from 4th (and just 4 wins between 1st and 7th) this is currently one of the closest seasons we’ve had for a while. 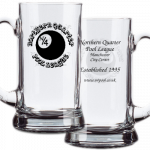 In the Gallon competition the Wheatsheaf Oaks also hold on to the top spot, with the Steven Charles Fugees following closely behind with a determined performance so far in the quest for the highly desired glass tankards.

The latest monthly update to the results has been completed.

Tony Minogue of the Derby A team has an impressive 91.7 percent hit rate with just one defeat so far from twelve games. Another Tony, Campbell this time from the Wheatsheaf Oaks team, along with Paul Marshall from the Steven Charles Snooker team are both just one more defeat away on ten wins.

The top ten has a good mixture of teams with representatives from 6 of the 8 in the competition. With the mid season break just ahead of us it will be interesting to see if these players can maintain their form for the second half of the season.

Players are reminded that if they are unavailable for a fixture, they must make arrangements to reschedule at least 7 days in advance of the date. This year there is a week in between each round of the KO competition available for rescheduled games or friendly matches to be arranged.

Players should try to make suitable arrangements between themselves and communicate any changes of date to the league via your Captain. If there are any problems contacting your opponent please ask your Captain who can contact the Chairman or League Secretary for assistance if necessary.

As decided at this years AGM, given venues must be strictly adhered to for the preliminary rounds of the tournaments. In exchange for this restriction, a venue choice will be allowed for the final rounds. Subject to agreement of all parties, otherwise a random neutral venue will be chosen by the League.

Good Luck to all competitors…

Guidance for Players and Referees

Captains are hereby reminded that all competitors (especially those acting as referees) should be familiar with both the league playing rules and the guidance written on this website.

Please ensure all your team members have read this guidance and fully understand the information given.

Click here to read the Guidance for Players and Referees