The game shall be known as 8 Ball Pool and referred to in these rules as “the game”. It is intended that the players and teams should play 8 Ball Pool in the true spirit of the game and in a sportsmanlike manner.

It should be clearly understood that the referee is the sole judge of what is fair and unfair play. The referee will take whatever action is necessary to ensure that these rules are observed.

2. REQUIREMENTS OF THE GAME

The game is played on a rectangle 6-pocket table with 15 balls, plus a cue ball. Balls comprise two groups, represented by two different coloured balls plus the 8 ball which is black.

Alternatively, numerical balls may be used numbered 1-7 which are plain coloured balls, 9-15 which are striped coloured balls. Balls in the two groups are known as object balls.

3. OBJECT OF THE GAME 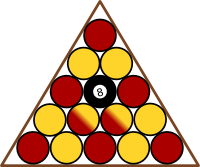 The player or team pocketing their group of object balls first in any order and then legally pocketing the 8 ball (black) wins the game.

4. COMMENCEMENT OF THE GAME (OR RE-START)

(a) The balls are racked as illustrated with the 8 ball (black) on the 8 ball spot which is at the intersection of the centre and corner pockets.
(b) Order of play is determined by the flip of a coin for knock-out competitions. Home team to break in league matches.
(c) The opening player plays at the triangle of object balls by striking the cue ball from any position on or within the “D”. He/she must pocket a ball or cause at least two object balls to hit a cushion. Failure to do so is a foul break and will result in the balls being re-racked. The opposing player re-starts the game with one break shot followed by one visit.
(d) On the break if a player legally pockets an object ball then that denotes his/her group, unless he/she pockets balls from each group, when he/she must nominate his/her choice before continuing to play.
(e) Combination shots (playing one colour onto another) are allowed.
(f) If a foul is committed on the break other than as in 4(g) any balls pocketed are ignored in determining groups.
(g) If the player pockets the 8 ball (black) from the break, the game shall be re-started by the same player. No penalty will be incurred. The balls to be re-racked. This applies even if other balls, including the cue ball, are pocketed as well.
(h) If a ball or balls are legally pocketed, this entitles the player to one additional shot and this continues until the player either: (i) Fails to pocket one of his/her set of allocated balls, or (ii) Commits a foul, at any time.
Removed AGM 2016

(a) In off (cueball pocketed).
(b) Hitting opponents balls before his/her own ball or balls, except when rule 6(b) applies.
(c) Failing to hit any ball with the cue ball.
(d) Jump shots – defined as when the cue ball jumps over any part of any ball before making contact with any object ball.
(e) If a player hits the 8 ball (black) with the cue ball on the first impact before his/her own balls have been potted, except when rule 6(b) applies.
(f) Potting any opponent’s balls.
(g) Ball off the table (see 8(g)).

(h) If a player’s clothing or body should touch any ball.
(i) Player not having at least one foot on the floor.
(j) Playing or touching with the cue any ball other than the cue ball.
(k) Playing out of turn.
(l) Playing before balls have come to rest.
(m) Striking the cue ball with any part of the cue other than the tip.
(n) Striking the cue ball with the cue more than once.
(o) Failing to nominate when rules 4(d), or 6(b) apply.
(p) Foul break (see 4(c)).
(q) Push-stroke (see 8(a)).
(r) Moving an object ball or the 8 ball (black) when playing away from a touching ball.

(c) Following the single free shot the player will commence his/her normal visit.
(d) The white ball must be played from where it comes to rest unless pocketed(see 5(a)) or off the table (see 5(g)). It is then placed in any position on or within the “D” and can be played in any direction.

(a) PUSH STROKE – Defined as when the tip of the cue remains in contact with the cue ball once it has commenced its forward motion.
(b) CUE BALL IN HAND – When a player has the cue ball in hand he/she plays from any position on or within the “D” and in any direction.
(c) PLAYER IN CONTROL – A player is said to be in control of the table from the time that his/her body, cue or clothing touches the table prior to his/her shot, through his/her visit and up until his/her opponent does likewise prior to his/her visit. Any balls which fall into the pockets during this period (including 8 ball (black)), he/she is said to have potted and he/she is liable to any penalties or benefits normally awarded to him/her for the potting of that ball or balls as are accorded to him/her in the rules of the game (rule 5(c) applies).
(d) END OF GAME –The game is completed when the 8 ball (black) is potted in any pocket and all the remaining balls including the cue ball have come to rest, except where rule 4(g) applies.
(e) TOUCHING BALL – A player must play away from a touching ball which must not move see 5(r). If the touching ball is one of the players own group, he/she is deemed to have played that ball. If the touching ball is not one of his/her own group the cue ball must strike one of his/her own group. When 6(b) applies a player must play away from a touching ball and is deemed to have played that ball.
(f) FOUL SNOOKER – When the oncoming player cannot play the white ball onto both sides of any of his/her balls. Note: see 10(f).
(g) BALL OFF TABLE – A ball shall be deemed to be off the table if it comes to rest other than on the bed of the table.

Should any situation arise whereby a legal shot cannot be played, then the game shall be re-started by the same player whether this situation is arrived at by accident or design.

If in the opinion of the referee neither player is allowing the game to progress or a stalemate situation has arisen, then the game shall be re-started by the same player.

(i) Definition: A player is Snookered when it is impossible to play the finest cut possible on both sides of any of that player’s own Colour by way of a “straight – line” shot. Snookering an opponent is not a foul.
(ii) A player cannot be Snookered by a ball of the player’s own Colour. That is, if one of the player’s own coloured group is an obstructing ball, it will be ignored for the purposes of determining a Snooker.
(iii) A player cannot be Snookered on an Object Ball if the Cue Ball is touching that Object Ball.
(iv) A player cannot be Snookered by the straight sections of the cushions. If a straight section of a cushion is preventing the finest possible cut on the side of an Object Ball, that section of cushion will be deemed not to exist for the purposes of determining a Snooker on that Object Ball.
(v) If an Object Ball is partly obscured by a curved section of a cushion (Jaw), this in itself does not constitute a Snooker.