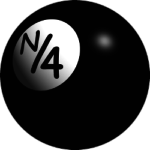 There are two matches that have been postponed, I am assured these will be played before the matches scheduled below.

Match A: Trotters v Oaks
Match B: Derby “A” v Derby “B” <- Venue changed to Derby

Congratulations to the Derby Brewery Arms “B” team for winning the Team Knockout Cup 2019.

Congratulations to the Steven Charles Snooker team who are crowned champions of the 2019-2020 season of the Northern Quarter Pool League, returning to the top after the Oaks knocked them from the top spot two years ago. A dominating performance with a winning percentage of 75% of their matches, recording a total 21 wins to just 7 matches lost. With a total of 88 games won, they have exactly the same result they recorded when they last topped the table in the 2016-2017 season.

A close battle for the runner up position, some 3 wins behind the winners with 18 wins, the Snooker Loopys take the spot on game difference with a final tally of 89 games won – 1 more than the winners.

END_OF_DOCUMENT_TOKEN_TO_BE_REPLACED

View all events
This site uses cookies: Find out more.