The presentation evening for the 2014-2015 Season is just over a week away, taking place at the Burton Arms Hotel on Wednesday 25th February.

As well as the all important presentation of the awards for the 2014-2015 season, there will be entertainment throughout the evening and the usual buffet arrangements to feed the hungry mob. 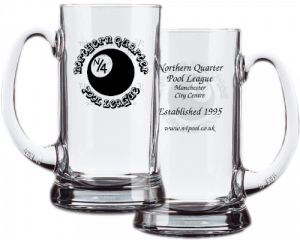 These will be awarded to the winners and runners up in the Gallon league.

The new season kicks off in just over two weeks on Wednesday 4th March.

The team entries remain the same as they were at the end of last season, starting this year with an even number of 8 teams. The Ducie Bridge team are now up to full strength and I hear several  rumours of new signings in various teams hoping to make an impression this year.

The final team line-ups for the 2015-2016 season will be available shortly after the start, it’s almost as exciting as the Formula 1 driver gossip!

Fixtures for the season are available now, see the Match Fixtures section for more details.

This year (as always) we hope to expand our range of venues, striving to give our pool players more choice when looking for a nice place to sink a few – pints and balls – and generally have a relaxing evening.

The Northern Quarter Pool League was established in 1995 and continues to enjoy a healthy membership with many long term participants. A large number of the traditional venues in this area have closed down (or changed the focus of their business) over the last 20 years, despite this the league has survived with various teams and venues coming and going throughout that time.

The league is primarily an amateur competition played under ‘old rules’, the main aim is to have an enjoyable and competitive evening, with good sportsmanship encouraged at all times. No cash prizes are awarded, all awards are presented in the form of trophies at the end of the season. 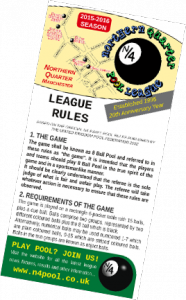 We are looking for new teams to join the league at pool venues in and around the Northern Quarter area, look out for our league rules leaflets in your favourite venue.

Experience has shown that many teams express an interest in joining the league during the season, only to disappear without trace when the entry date rolls around the next year.

We want to help new teams get into the league by joining us at mid season, giving them time to get used to match night etiquette and generally turning up to play.

Joining at this stage will almost certainly ensure a bottom of table finish, taking off some of the pressure to win, however it will qualify your team for entry to the team KO cup where the players can still win trophies.

There will be space for two teams to join, if you are interested and have some like minded friends then pop down to one of our meetings and introduce yourself and tell us what you can offer.

If you don’t have any mates but want to play in the league then come down to any match and speak to some of the team captains.

The most successful method of finding a place on a team is to simply turn up before matches and socialise with the other players, don’t expect to be automatically accepted by a team just because you think you should be.

Team spirit is an important ingredient for a successful team and many of the strongest teams are formed from like minded groups. Take your time to get to know other players in the league and see where you fit in best.